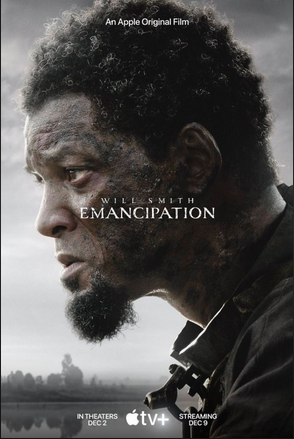 After holding it in limbo following Will Smith’s slap of Chris Rock at the Academy Awards in March, Apple will release the actor’s next big project, “Emancipation,” this December.

In the fallout of Smith’s smack of the comedian, the fate of “Emancipation” — a $120 million runaway slave thriller directed by Antoine Fuqua — had been uncertain. One of Apple’s most high-profile productions yet, the film had once been expected to be an Oscar contender this year. But an awards-season rollout of a film headlined by Smith, who the Academy of Motion Pictures Arts and Sciences banned from attending the Oscars for 10 years, has obvious complications.

In the two-minute preview, a slave named Peter (Smith) is seen planning his escape after hearing about the Emancipation Proclamation. He’s intent on using his wits, steadfast faith, and deep-rooted love of family to evade slave catchers in the swamps of Louisiana.

Inspired by the 1863 photos of a man known as “Whipped Peter,” the film is based on the story of the formerly enslaved man who joined the Union Army in hopes of being reunited with his family. The photos of Peter contributed to the public outrage against slavery during that time.

Following its first showing on Saturday (Oct. 1) in Washington D.C., director Antoine Fuqua shared with Deadline, “Will [Smith] is on a whole different level, in this film. Incredible.” Meanwhile, the Oscar winner, 54, explained on Instagram, “This was the hardest movie I’ve ever made. Blood, Sweat & Tears… LITERALLY! Shoutout to Apple who doubled (and tripled) down on their commitment to deliver this epic story to the world.”

The release of “Emancipation” will pose the biggest test yet of how eager moviegoers are for a movie headlined by Smith, an actor who has generated more than $6.5 billion in worldwide box office. Still, the brief exclusive run in theaters will also mean “Emancipation,” like Apple’s best picture-winning “CODA,” will be seen primarily in homes.