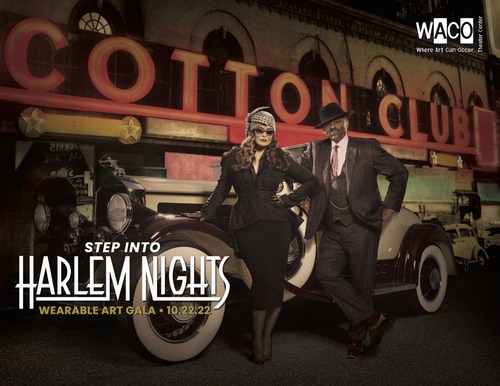 Where Art Can Occur (WACO) Theater Center announces the five-year anniversary, and this year’s Wearable Art Gala on Saturday, October 22, 2022 at 4:30 pm PST at the Barker Hangar in Santa Monica, CA. The Gala will be hosted by WACO Founders and Co-Artistic Directors Richard Lawson and Tina Knowles Lawson, longtime champions of art and mentorship, who opened the visual and performing arts center in 2017.

The evening serves as a fundraiser to support WACO’s artistic and youth mentorship programs.

“As we continue to navigate the setbacks of the pandemic, we are excited for the opportunity to gather again in person and garner support for the artists, audiences and young people that our work serves and will continue to serve,” says Richard Lawson. “When we started WACO, only two of our mentees said they might go to college. Now that we have had our first graduating class, all 22 kids are going to some type of university, college or trade school to live out their dreams. We are so proud of them,” adds Tina Knowles Lawson.

For the celebratory fifth year anniversary gala, the wearable art theme is Step Into Harlem Nights.

This year’s event will transform the 35,000 square foot hangar into an immersive experience bringing Harlem to Los Angeles, recreating the big ballrooms, jazz clubs, speakeasies, iconic restaurants and theaters where artists such as Duke Ellington, Cab Calloway, Billie Holiday and Ella Fitzgerald performed. “I have always had this dream to bring the energy, tastes and sounds of Harlem in the 1920s to 50s to our gala. From the fashion and the food, to the art, cars and supper clubs—on this night, people will be taken back in time to experience and be inspired by it all…today—in 2022,” shares Tina Knowles Lawson.

The event will be hosted by five-time NAACP Image Award winner Keke Palmer, and feature an all-star lineup, including a special performance by Grammy and Golden Globe Award winner Andra Day as well as a musical tribute by Chloe Bailey and Halle Bailey. Other acts will feature both emerging and established artists including the Debbie Allen Dance Academy (DADA), with choreography by the Television Academy’s Governors Award recipient and DADA founder Debbie Allen, Chicago Philharmonic Composer-in-Residence Marcus Norris conducting the dynamic South Side Symphony, Daytime Emmy Award winner Obba Babatundé, and Grammy-nominated Jazz and R&B Music Hall of Famer Freda Payne—among other award-winning performers to be announced. The evening will include the return of Los Angeles-based DJ Millie and close with a finale performance by award-winning artist, producer, and the creator of Club Quarantine, D-Nice.

Celebrity Judge Star Jones returns to lead the live art auction, featuring gallery represented artists and new talent that include April Bey, Fahamu Pecou, Samuel Levi Jones, and Shinique Smith, among others. An online preview and registration for the auction can be completed by texting WACO to 243-725. The online preview begins October 17.

Corporate sponsors of this year’s event and programs include contributions from SheaMoisture, PRG, Mielle and Fund II Fund Foundation. In-kind gifts for the event are provided by The Hue Society, Nespresso, Republic National Distribution Company, and United Airlines. Additional support is provided by Netflix and Meta, a collaboration with the We the Culture initiative, elevating and supporting Black creators.

“It’s a party with a purpose and after two years virtually, I’m glad that we can connect, continue to pour into our mentees and at the same time, honor a piece of our history through this artistic experience,” says Richard Lawson.

ABOUT WHERE ART CAN OCCUR (WACO) THEATER CENTERWACO Theater Center is a performing and visual arts organization dedicated to the empowerment of Los Angeles artists, young people and stories of the African diaspora.

Founded in 2016, WACO opened its doors to the public in 2017. Located in the heart of North Hollywood’s Arts District, the state-of-the-art complex includes a 99-seat theater, an art gallery space and is the homeprofit of Richard Lawson Studios. Over its five-year history, WACO has invested in more than 700 artists and 1000 young people in Los Angeles and beyond. WACO’s mentorship program Tina’s Angels and Richard’s Warriors, exposes inner-city youth to the world of the arts and opportunities beyond their zip code. Each year participants are provided computers, attend workshops like etiquette class, and field trips to create first time experiences. WACO is committed to providing a creative center where art can occur and give artists and youth a place to grow their talent and celebrate their artistry.