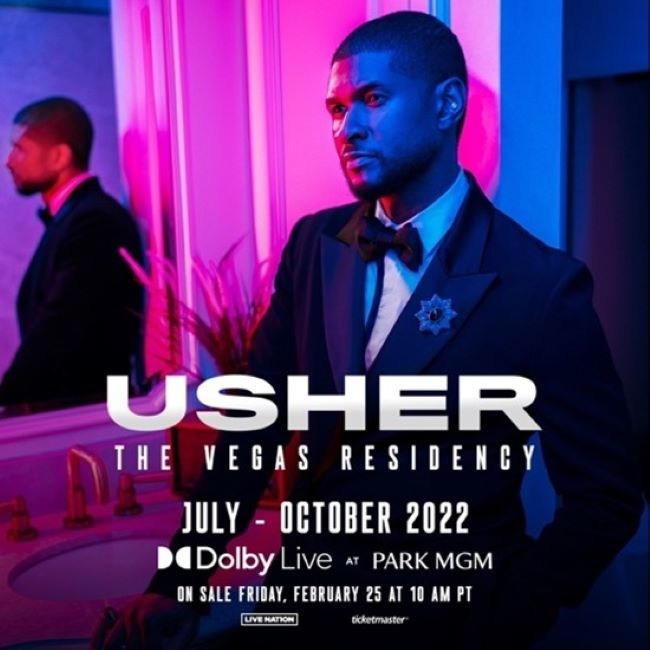 Usher’s move to Dolby Live at Park MGM is the next generation follow-up to his extraordinarily successful 20-show Las Vegas residency in 2021, which sold-out every date, bringing in record grosses.

Presented in partnership by Live Nation and MGM Resorts International, the show will be custom-designed for the expansive Dolby Live stage, allowing fans to feel like they are not just watching a performance, but are a part of it. The immersive new show will incorporate audience interaction and staging throughout the 5,200-seat entertainment venue, where every guest will have an up close and personal experience with the superstar. The exclusive, only-in-Vegas spectacular will be packed with an impressive repertoire of smash hits spanning the multi-talented showman’s 20-year career, as well as new music.

Citi is the official pre-sale credit card of Usher’s residency at Park MGM. As such, Citi cardmembers will have access to purchase pre-sale tickets Friday, Feb. 18 at 10 a.m. PT until Thursday, Feb. 24 at 10 p.m. PT through Citi Entertainment®. For complete pre-sale details visit www.citientertainment.com.

General ticket prices begin at $79, plus applicable tax and fees, and a limited number of VIP meet & greet packages also are available for each show. Tickets can be purchased online at www.ticketmaster.com/ushervegas. All shows begin at 9 p.m.

The 23 performances going on sale are:

Usher has changed music, culture and countless lives. Beyond selling over 80 million records worldwide and collecting dozens of awards, he has simultaneously lit up the small screen on NBC’s The Voice and the big screen in blockbusters such as Hustlers. He has also tirelessly distinguished himself as a devout humanitarian, raising tens of millions of dollars for various causes and uplifting youth via his New Look Foundation since 1999. A true outlier, he was equally at home on the stage of his blockbuster 2021 Las Vegas residency as he was on a 2016 government cultural mission to Cuba as part of President Barack Obama’s Presidential Committee for Arts and Humanities. The multiple GRAMMY Award-winning diamond-selling international megastar, actor, dancer, entrepreneur, philanthropist and proud Atlanta resident inspires change yet again in 2022 and beyond.

Thus far, he has gathered eight GRAMMY Awards and emerged as Billboard‘s “#1 Hot 100 Artist of the 2000s,” “#2 most successful artist of the 2000s,” and “one of the best-selling artists in American music history,“ according to the RIAA. He catapulted four consecutive albums to #1 on the Billboard Top 200, beginning with the landmark diamond-certified Confessions in 2004. He continued to push boundaries with a series of singles and shows before setting the stage for his ninth full-length offering in 2022.

Most importantly, Usher gives back at every turn. Under his leadership, the New Look Foundation provides opportunities for young people in underserved communities, enabling them to flourish and achieve seemingly impossible dreams. He has contributed to numerous philanthropic causes and historic advancements. He penned a moving essay in The Washington Post, lobbying for the recognition of JUNETEENTH as a holiday in 2020. Fostering the national and eventual congressional conversation, he attended the signing of the bill making JUNEETEENTH a federal holiday at its passage during 2021. He has achieved recognition and various honors from the Boys & Girls Club of America, the Trumpet Foundations, and Do Something. The NCAAP selected him as its 2010 Ford Freedom Award Scholar, and Morehouse College honored him with the prestigious 2014 “Candle Award.” In 2022, he takes the stage at The Beloved Benefit, which exists to fortify and transform communities throughout Atlanta.

About Park MGMPark MGM is the Las Vegas Strip’s first smoke-free resort, offering an intimate hotel experience on a grand scale. Park MGM features 2,700 guest rooms and suites in addition to NoMad Las Vegas’ 293 well-appointed guest rooms and suites on the resort’s top four floors. The resort’s robust culinary program features NoMad Library; L.A. legend Roy Choi’s Korean BBQ concept, Best Friend; Hogsalt Hospitality’s renowned Bavette’s Steakhouse; and the 40,000-square-foot vibrant Italian marketplace, Eataly, among other dining and cocktail experiences. Dolby Live, the resort’s 5,200-seat entertainment destination, is home to special engagements by Lady Gaga, Bruno Mars, and Aerosmith, among other top artists. Park MGM also is home to On The Record, a unique nightlife concept from LA-based Houston Hospitality. Park MGM and NoMad Las Vegas are located in the heart of The Strip, next to the entertainment and dining neighborhood created by The Park and the 20,000-seat T-Mobile Arena. Park MGM and NoMad Las Vegas are operated by MGM Resorts International (NYSE: MGM). For more information and reservations, visit ParkMGM.com, call toll-free at 888-529-4828, or find us on Instagram, Facebook, and Twitter.