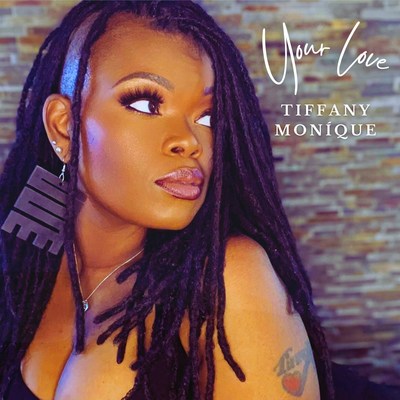 ‘Your Love’ is a powerful ballad that celebrates simplicity and true love over materialism, according to the singer. Following her debut release ‘Nemesis’ in 2010, Tiffany Monique cites the balance of motherhood, life & health challenges as a cause for delay in her solo efforts. After overcoming her battle with esophageal cancer in 2015, the journey to physical & emotional healing inspires her return to the forefront as a solo artist. With her newest single, Tiffany issues a powerful ode love inspired by her personal experiences. Kevin “Kwiz” Ryan, her husband who she met as a colleague while touring with Beyoncé, produced the song.

“I believe ‘Your Love’ will resonate with fans of soulful R&B who appreciate full-throated, heartfelt singing,” says Tiffany. “I look forward to placing my musical footprint on the same landscape as the amazing artists my career has blessed me to work with.”

Back in 2010, Beyoncé said of the singer, “Tiffany’s voice has effortless strength, sass, seduction, and heart with a tone that puts you at ease. I am very lucky to have worked with her for many years and I am proud that she now has such a wonderful piece of work to share with the world.”

Tiffany Monique has a lengthy career as a vocalist & performer. She has performed with a wide range of artists–including Mariah Carey, Christina Aguilera, Brandy, Anita Baker, Jill Scott, Ledisi, Kelly Clarkson and more. She joined Beyoncé’s team as 1/3 of the background vocalist trio, ‘The Mamas,’ in 2007 and became the star’s lead background vocalist in 2018. She was the Assistant Vocal Arranger & Choir Director of Beyoncé’s Coachella performance, which resulted in the 2019 Grammy Award-winning Best Music Film, “Homecoming.” Tiffany attended Morgan State University in Baltimore, Maryland & is a graduate of William Paterson University in Wayne, NJ. She is a member of Alpha Kappa Alpha Sorority, Incorporated.