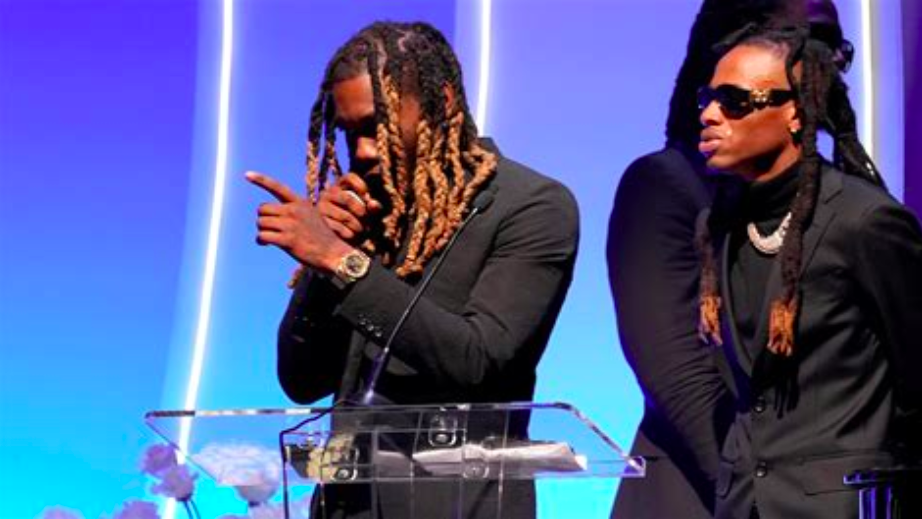 Funeral proceedings for the late rapper, Takeoff, began at 12 p.m. ET Friday as fans and loved ones gathered for the “Celebration of Life for Takeoff.”

The service is being held in State Farm Arena in Atlanta, Georgia. The Migos member grew up in the city of Lawrenceville, located roughly 30 miles west of the Georgia capital. Tickets to the event were open to Georgia residents but quickly sold out.

Takeoff, whose real name is Kirsnick Khari Ball, was fatally shot last week outside a private party hosted at a Houston bowling alley. The 28-year-old was shot on November 1 around 2:30 a.m., and police had declared one person deceased when they arrived at the scene. Two other victims in the incident were also taken to nearby hospitals with non-life-threatening injuries, police said.

Relatives of the rapper chose not to allow media into the homegoing service, and also took an extra step to ensure privacy by confiscating all recording devices while mourners were inside. Some fans, however, shared glimpses of the occasion via social media, including “Hip-Hop Hoarder” Nu Face, who shared snaps of the scene outside of the arena ahead of the service.

“Senseless violence and a stray bullet has taken another life from this world and we are devastated,” the record company wrote in their statement.

Migos, which reached four Billboard Hot 100 Top 10 entries during their career as a group, is made up of Takeoff, his uncle Quavo, and Quavo’s cousin, Offset.

The Harris County Institute of Forensic Sciences in Houston found in their autopsy that Takeoff had died from gunshot wounds to the head and torso.

Houston Police are still looking to speak with people who attended the private party at 810 Billiards & Bowling last week, Police Chief Troy Finner said at a press conference last week. Finner added that Takeoff was “well respected” and that the police had “no reason to believe he was involved in anything criminal at the time” of the shooting.

He also posted a snap of the funeral program alongside caption, “Praying for the day when we say and agree that enough is enough.This black man reached heights no other could reach and wasn’t able to start a family because of senseless violence.I didn’t have to know him to feel this pain for our people ??️.”

He continued in another post, “I’ve been in State Farm Arena hundreds of times,I’ve never heard it this quiet.Prior to Offset,we were started off with a song from Justin Bieber and an emotional speech from Drake paraphrasing Maya Angelou…Quavo recalled getting in trouble listening to The Hot Boyz and his sister,mother of Takeoff taking it..They later won a talent show performing as The Hot Boyz #RIPTakeOff.”