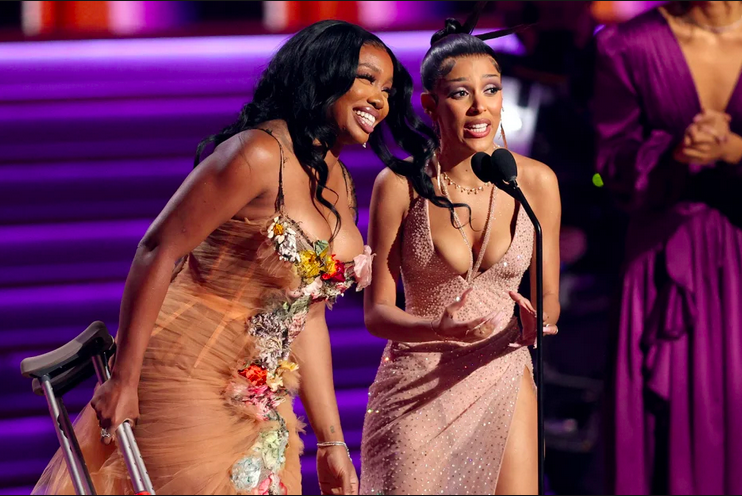 SZA spilled the tea at Mad Cool Festival on Sunday (July 10) that she’s teaming up once again with Doja Cat for the pair’s new collaboration, “Shirt.”

“Want to know a secret? You all want to know who’s on this song? It’ll be like our secret, right?” the “I Hate U” singer asked the packed crowd during her set in Madrid, Spain. “The hint is we already have a song together. Her name starts with a ‘D’ and it rhymes with Soulja.”

The previous song SZA referred to was, of course, “Kiss Me More” off Doja’s 2021 album Planet Her, for which the pair won the Grammy for best pop duo/group performance back in April. The disco-tinged jam also earned nods for record of the year and song of the year at the ceremony but lost in both general categories to Silk Sonic’s “Leave the Door Open.”

“Shirt” was teased in 2021 via TikTok and later appeared as a bonus clip at the end of SZA’s music video for “Good Days.” In the chorus of the track, the R&B singer emotively sings: “Bloodstain on my shirt/ New b—h on my nerves/ Old n—a got curved/ Going back on my word/ Damn, b—h, you like thirty.”

While SZA has yet to share an official release date for the forthcoming duet, it will follow the recent deluxe edition of her 2017 debut album Ctrl. To commemorate the LP’s five-year anniversary, the R&B star added seven previously unreleased bonus tracks to the deluxe version including “2AM,” “Miles,” “Percolator,” “Awkward,” “Jodie,” an alternate take on “Love Galore” and lead track “Tread Carefully.” And thanks to the bonus cuts, the album rebounded to the No. 1 spot on the Top R&B Albums chart, dated June 9.