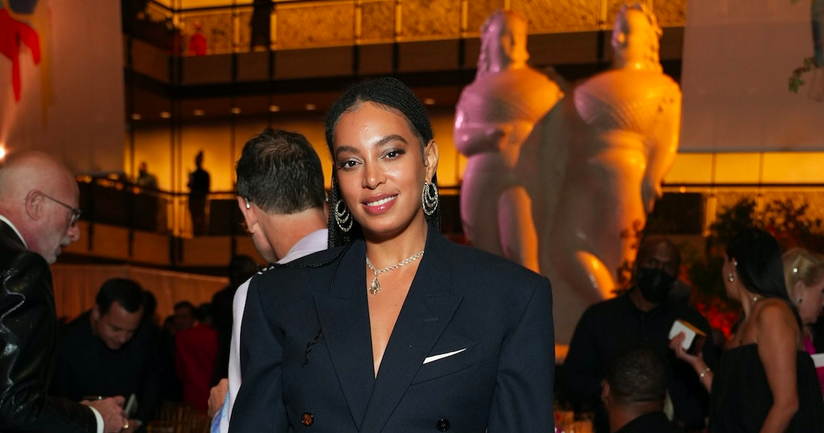 The David H. Koch Theater at New York’s Lincoln Center was likely full of first-time attendees on Saturday. Anticipation for the weekend midday performance had been high ever since the New York City Ballet (NYCB) announced in August that Solange was commissioned to compose music for a piece performed by the company.

On Wednesday, Solange’s close friends and family were all in attendance for her big day, including her mother Tina Knowles-Lawson and her big sis Beyoncé, who showered the superstar with love and praise on Instagram after the show.

Solange is the first Black woman to score a composition for the New York City Ballet, but this isn’t the first time the multihyphenate has worked with a revered fine art institution. In 2020, the “Cranes in the Sky” crooner curated a showcase at the Guggenheim Museum in honor of her third studio album A Seat at the Table. In 2019, the Houston native performed a sold-out show at the Sydney Opera House where she delivered a powerful multi-sensory concert loaded with bass, strings, and enchanting choreography. During the show, Solange sang revamped songs off her last two albums A Seat at the Table and When I Get Home.

Paired with choreography by Gianna Reisen for a piece called “Play Time,” this composition was Solange’s first foray into writing music for a ballet. She is the second Black woman, and third woman overall, to compose music for the NYCB. While the piece debuted at the annual Fall Fashion Gala on Thursday, Saturday was the first performance for the public.

To say that Solange and the NYCB rose to the occasion would downplay the magnitude of the event. “Play Time,” part of a multi-tier performance from several composers and choreographers, stood out as an imaginative, ambitious movement.

“My beloved sister, there are no words to express the pride and admiration I have for you,”                      Renaissance wrote while captioning a photo of her little sister holding a beautiful bouquet of flowers.

“You are a visionary and one of one. Congratulations on being the first African American woman to compose for the New York City Ballet. The piece you composed is phenomenal. I love you deep. Might I suggest you don’t f*** with my sis,” Bey added.

On Twitter, Solange’s father Mathew Knowles, gushed about the star’s huge accomplishment, telling fans that he was “So proud” of his daughter.

“She has worked so hard on her creativity, self-expression and art ever since she was young. While I’m not surprised to see her continuing to soar, I remain in awe by her accomplishments. Congratulations on your New York City Ballet debut!”

Mama Tina also took to social media with a sweet photo alongside her superstar children, which featured a funny caption that read:

“When you compose a Piece for the NYC Ballet and Lorraine Schwartz decks you out in Emeralds and diamonds but you have to return them the next day ! Can I keep my earrings Lorraine? @lorraineschwartz.”