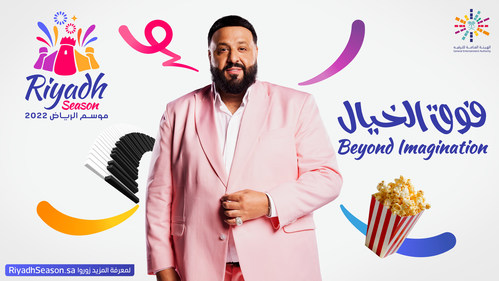 Real Madrid and French national team star Karim Benzema appeared in a teaser video announcing the launch of Riyadh Season 2022 in the Saudi capital, Riyadh. The video included other international celebrities, such as DJ Khaled, who reiterates his famous line: “They didn’t believe in us,” concluding with the phrase: “RIYADH DID!” Other international stars of Arab origin participated in the teaser video of the 3rd edition of Riyadh Season, bearing the slogan “Beyond Imagination.” The Egyptian Liverpool star, Mohamed Salah, carries a sphere model, symbolizing the largest sphere in the world located in the Boulevard World zone.

The teaser video was posted on the Twitter account of Turki Alalshikh, Chairman of Saudi General Entertainment Authority, with distinctive scenes and a set of visual and musical effects.

Arab singing stars Majed Al Mohandis and Nancy Ajram appeared in the video singing “the world is in your hands in Riyadh,” referring to Boulevard World zone which represents the lifestyles and cultures of many countries around the world and actress Nadine Njeim who represented the experience of the life of fame in the video hinting Studios sub-zone in Boulevard Riyadh city zone. Throughout the video, the stars were touring the zones of the season and exploring the areas of the countries whose cultures and lifestyles are presented in the season.

Riyadh Season 2022 is characterized by containing a variety of entertainment activities in the field of games, restaurants and cafes, concerts and plays, and many international exhibitions in various fields of entertainment.