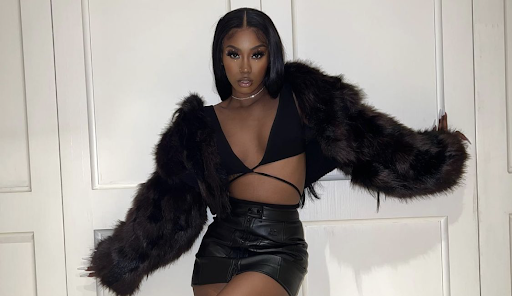 The Alabama-hailing rapper is an effortless beauty with smooth, chocolate brown skin, and a face that lands somewhere between Bratz Doll and Barbie. Holding different ring sizes and shapes up to her ear, she glances at her stylist and publicist for approval. She’s deliberating between a diamond encrusted star or a butterfly to put in the “tash rook” (the flat piece of cartilage) of her right ear. She settles on the star, which will complement the petite moon stud she already has on her nose. Flo Milli appears to be a bit nervous as her stylist, and a tattoo-covered associate disappear down a flight of stairs.

She filled the Extended Play stage with distinct versatility, back by dancers who fed off the reciprocated energy.

Flo Mill dropped her debut album back in July, which is a sequel from her debut mixtape, Ho, Why Is You Here? Her project titles have derived from her love for reality tv shows. She even featured VH1 legend, Tiffany “New York” Pollard on the intro and outro of her debut album.

It’s a bit ironic that the rising artist is bashful when it comes to ear piercings because she is known for her confident delivery and no-bullshit, confrontational lyrics that fearlessly rebuke fuckboys and haters. Whenever you hear her signature catchphrase, “It’s Flo Milli shit,”