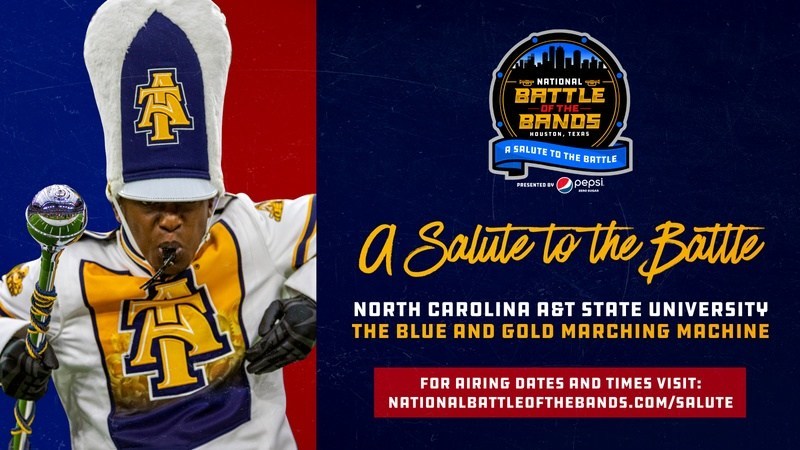 The "National Battle of the Bands (NBOTB): A Salute to the Battle''

The “National Battle of the Bands (NBOTB): A Salute to the Battle” documentary film re-airs in over 44 markets throughout June in honor of Black Music Month. Presented by Pepsi Zero Sugar, the film brings the action, energy, and pageantry of the ‘Battle’ performance to viewers, in an up close and personal perspective, right into the comfort of their homes where they can experience the action with their friends and family.

“Our film creates another avenue for HBCU marching bands to be seen, heard, and experienced by the masses,” says Derek Webber, Executive Producer & CEO of Webber Marketing. “Any time we have an opportunity to elevate their visibility – whether through television and in-person events – we will do so in a major way to honor the insurmountable influence and impact of HBCU marching bands on the world.

The film originally  premiered  in February for Black History Month as an instrument to shine an intimate light onto the global influence and impact of HBCU marching bands while giving viewers a behind-the-scenes peek into the work, dedication, and passion that goes into creating the performances fans have grown to love and anticipate during football halftimes, homecoming parades and the coveted ‘battle of the bands’ showdowns.

For a full list of dates, times, and stations to watch “NBOTB: Salute to HBCU Marching Bands visit  www.nationalbattleofthebands.com/salute.

To purchase tickets to the 2022 Pepsi National Battle of the Bands presented by Toyota on Saturday,  August 27 at 6PM CST  in Houston, TX at NRG Stadium visit www.nationalbattleofthebands.com/tickets and stay updated on social media at @NationalBattleOfTheBands (Facebook/Instagram) / @NationalBOTB (Twitter).

About National Battle of the BandsThe event’s mission is to enhance the exposure of Historically Black Colleges and Universities (HBCUs) and their marching bands, the roles they play in educating aspiring musicians and developing our future leaders. Event organizers have generated more than $700,000 in scholarships for the participating colleges and universities. www.nationalbattleofthebands.com