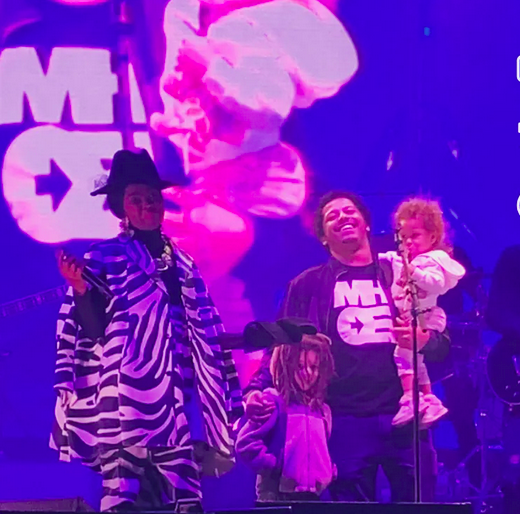 Lauryn Hill’s son Zion shared a heartfelt moment with his mother following her performance of “To Zion” at ONE MusicFest over the weekend.

Shortly after performing “To Zion,” the 1998 song about her choice to keep her first child with Rohan Marley, son of Bob Marley, Lauryn was surprised onstage by Zion. The two embraced for a moment and then he returned backstage. Hill asked the crowd to make some noise for Zion before asking him to come back with her two grandchildren, Zephaniah and Azaria.

She then highlighted Zion’s shirt that read, “The Most High over everything.” In approval of his t-shirt choice, she said, “Yes, Zion.” The 47-year-old then made a lite joke about her children making her a “very young grandma.” The touching moment can be seen at the 18 minutes and 14 seconds mark of the Instagram video below.

“To Zion” appeared on Hill’s landmark album The Miseducation of Lauryn Hill, which won the Grammy for Album of the Year and Best R&B Album. That same year, she also received the Grammy for Best New Artist and Best Female R&B Vocal Performance for “Doo Wop (That Thing).”

The monumental track was about her deciding to have her son with Rohan Marley, while many discouraged her from doing so at that time in her career. The song became a standout on the album and was deemed a personal testimony relatable to many women.

Later in Ms. Hill’s ONE Musicfest performance, her other three children, John Nesta, Micah, and Sarah, joined her on stage as well. Selah and Joshua did not make an appearance.