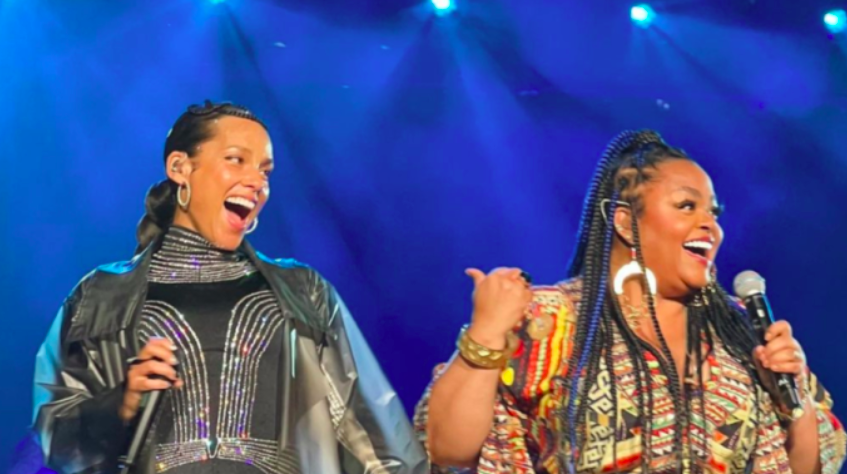 Alicia Keys wrapped up the most recent run of The Alicia + Keys World Tour in Nashville Saturday, and was joined by fellow R&B songstress Jill Scott as she concluded the jaunt in Music City.

“Congratulations @aliciakeys on your last night of this run!!! ❤️#Nashvillewasamazing,” Scott, 50, captioned an Instagram snap of the duo onstage together, smiling wide for the crowd.

The night brought about the pair’s first performance of Keys’ song dedicated to the Philly songstress entitled “Jill Scott.” The ladies also performed Scott’s classic track “The Way” from her 2000 debut album, Who Is Jill Scott?

In addition to high-profile collaborations with names like Sampha, Khalid, and Miguel, the album features two match-ups with Philly powerhouses — singer, songwriter, and poet Jill Scott, as well as spitfire rapper and sonic visionary Tierra Whack.

Whack’s collab with Keys lands early in the album, and with a backdrop of minimal electronic beats and suave finger-snaps, Keys sings about countering despair with self-care, and Whack’s rhymes joyfully follow suit: “If I was you, I would probably cry and miss me too / Dissin’ who? This the new me, I’m gettin’ chicken, boo / Whack and Alicia. Well, at least I feel invincible.”

In November, Keys is scheduled to present music industry legend Clive Davis — who signed Keys to J Records in 2000 — with the 2022 Portrait of a Nation award.