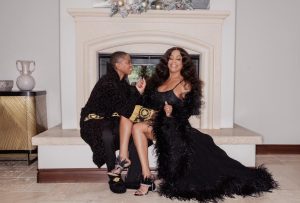 Rock & Soul artist Jessica Betts released a new music video for her single “We Drip” today. Her wife, actress Niecy Nash, got a chance to say “I Do” again! This time, it was to be the co-director and leading lady in Jessica’s music video. The actress says she is wearing her multiple hats with pride.

“When it comes to JB’s music, I was a fan long before I was cast in the real life role as her wife! I threw my hat in the ring as a potential director and was happy it worked for me to co-direct with Devin Jordan. But, when JB asked me to be in the video as well I was over the moon! Loving her out loud will always be my greatest joy. Loving her music the way I do, will always make me her biggest fan.  When we are in sync it’s magic and we are just getting started! We drip babyyyy,” says Niecy.

“We Drip” is the latest visual release that was shot in LA with cameos from their LA home, co-directed by Niecy and Devin Jordan. The accomplished and multi-talented Rock & Soul artist says the song is a kaleidoscope of all the beautiful forms and expressions of Love and describes her song a love anthem, that is a feel good, uptempo, sensual bop.

“I dreamed of a love like this. This song is dedicated to my beautiful wife Niecy Nash Betts, who inspired me to write this sensual and beautiful piece. We Drip represents the beauty in sensuality. It represents expressing love out loud. It describes how bold and fly we are. It also represents how powerful love is. Love always wins,” says Jessica.

“We Drip” is the lead single off of Jessica’s upcoming EP slated for release late summer. The single is now available everywhere music is streamed and sold.

The Chicago born artist is a quadruple-threat as a musician playing several instruments including the guitar, she is a singer, songwriter and actress. Recently, Jessica co-starred on FOX’s new version of the popular game show “Don’t Forget The Lyrics” hosted by her wife Niecy Nash, airing May 23. She is also on the new season of P-Valley premiering this June on the Starz network.
About Jessica Betts

Chicago born, Singer/Songwriter Jessica Betts is a thrilling electric/acoustic Rock & Soul Artist. Gifted with an incredibly soulful voice, the multi-talented artist signed her first record deal at the age of 16 with Grammy winning group “BOYZ 2 Men” in 1998 with their label Stone Creek Records. In 2000,  Betts’ single “Get Up” was released on the soundtrack of the iconic movie “Big Mommas House,” starring Martin Lawrence. However, Betts is best known as the winner of the “Road to Stardom” reality show in 2005,  she beat out thousands of contestants and captured the hearts and admiration of judges such as Missy Elliot, Madonna, Teena Marie, Dallas Austin and Mona Scott-Young with her amazing voice. In 2011, Betts was inducted as a BET Music Matters artist. This created an additional opportunity with the BET network, as an artist at the BET Honors pre-show in 2014.

Betts is a multi-hyphenate creative and artist who loves to write her own original music spanning multiple musical genres from rock, pop, gospel, reggae, and R&B. She recorded a fan appreciation Full mix EP titled “LLCoolJess” released in 2015, followed by her EP “Earthquake” in 2016, “So Hot” featuring LBX in 2017 and her most recent hit single, “Catch Me” released in 2018. However, in 2020, Jessica Betts married Emmy winning actress Niecy Nash and released a stunning visual to Catch Me. This love anthem was the song that ultimately brought their two hearts together. “Catch Me” has debuted on Good Morning America, Claws on TNT and OWN Network’s Queen Sugar.