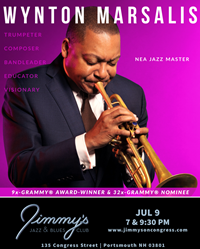 Wynton Marsalis has been described as the most outstanding jazz musician and trumpeter of his generation; one of the world’s top classical trumpeters; and a brilliant composer and bandleader. His life is a portrait of discipline, dedication, sacrifice, and creative accomplishment and has won 9 coveted GRAMMY® Awards. In 1987, Wynton Marsalis co-founded a jazz program at Lincoln Center and under his leadership the program has developed an international agenda with up to 400 events annually in 15 countries. Wynton has produced over 60 albums and has sold over 7 million albums worldwide – including 3 Gold Albums.

There is a substantial amount of recognition for Wynton Marsalis’ groundbreaking accomplishments in jazz across the world. From the United States House of Representatives, he has received a citation for his outstanding contributions to the Arts and was appointed as a UN Messenger of Peace. In November 2005, he was awarded The National Medal of Arts, the highest award given to artists and arts patrons by the United States Government. Honorary degrees have been conferred upon Wynton by twenty-nine of our nation’s leading academic institutions including Columbia, Brown, Princeton and Yale University. Marsalis has been inducted into the American Academy of Achievement and was dubbed an Honorary Dreamer by the “I Have a Dream Foundation.” Time magazine selected Wynton as one of America’s most promising leaders under age 40 in 1995, and in 1996 Time Magazine celebrated Marsalis as one of America’s 25 Most Influential People. Marsalis was awarded the Grand Prix Du Disque of France, the Louis Armstrong Memorial Medal, the Netherlands’ Edison Award and the Algur H. Meadows Award for Excellence in the Arts (1997). Marsalis has received countless plaques and was given the Key to over 50 cities.

According to Marsalis, what you hear in a great jazz band is the sound of democracy, “the jazz band works best when participation is shaped by intelligent communication.” This intelligent, hard swinging interplay has made Marsalis’ bands the favorite among jazz musicians and audiences worldwide. Wynton Marsalis is always received warmly and enthusiastically wherever he is in the world. The connection is the music, which mimics our valued way of life.