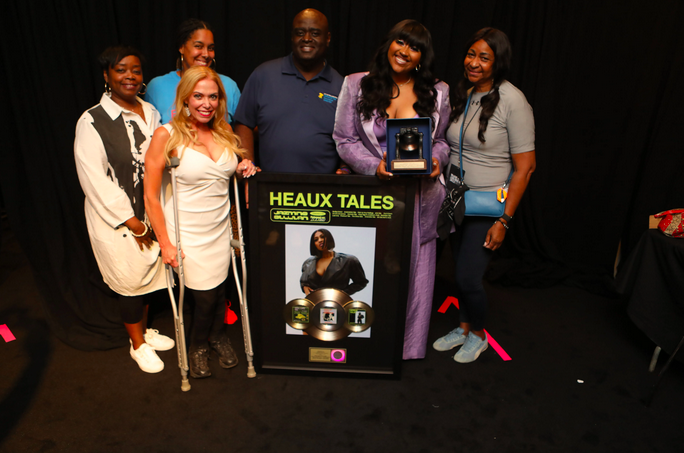 Jazmine Sullivan received a top honor from her hometown. During the Made In America festival in Philadelphia, the hometown hero was awarded by the mayor of Philadelphia Jim Kenney. Two-time Grammy-winner   was honored with an official Liberty Bell presentation on Saturday (Aug. 3). The Philly native also received the gift from Sheila Hess, the official city representative, and others during the 2022 Made in America Festival.

Jazmine Sullivan is also making major career moves. Recently, it was announced that she has been added as a battle advisor on NBC’s The Voice. She will be on John Legend’s team. As a new addition to the cast, she hopes she can inspire the contestants with her story.

According to Billboard, Jazmine Sullivan’s Heaux Tales earned her a second No. 1 album on the Top R&B Albums chart after a six-year hiatus. The project sold over 43,000 equivalent album units. Her fourth studio album went on to garner awards from BET, NAACP, Soul Train, and the Grammys.

“It’s just about perseverance,” Sullivan told E! News. “Just keep going, keep going. You never know when that moment is going to happen for you, but you got to be true to yourself. You got to keep doing your thing and know who you are, not change that. And then eventually, like you (Legend) said, people will start to come to you.”

The historic Liberty Bell is one of Philadelphia’s most symbolic treasures as it represents freedom in the United States. Created in London, the bell was made in 1752 and then shipped to the Pennsylvania State House. The Liberty Bell representation is only given to the most distinguished honorees who’ve represented Philly in the best way. Past recipients have included Patti Labelle, Michael B. Jordan, Mary J. Blige, Adam Sandler, and Sylvester Stallone.