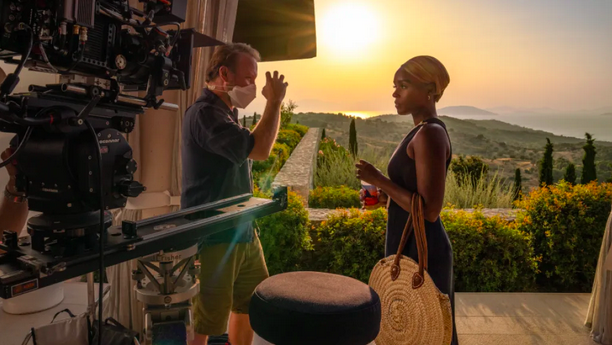 Director Rian Johnson is having some fun in behind-the-scenes photos for Glass Onion: A Knives Out Mystery. The sequel to 2019’s Knives Out made the news earlier this week with the reveal of Glass Onion‘s release date on Netflix, along with a set of first-look photos. Daniel Craig is returning as Detective Benoit Blanc, ready to crack another mystery featuring an ensemble cast.

Janelle Monae is set to star in Knives Out follow-up Glass Onion. Monae will appear alongside Daniel Craig and Edward Norton in the Rian Johnson-directed effort. Johnson spoke on the inspiration behind the film’s title in an interview with Netflix’s Tudum.


“Blanc was always outside of the sphere of our protagonist and was a little bit more of an enigma in the first movie,” Johnson added. “Whereas, in this one, Blanc gets an invitation to come to this murder mystery on this island.”

Monáe’s last film was 2020’s Antebellum. She also starred in the second season of the Amazon series, Homecoming. In May, Monae revealed that she’d been cast to play Josephine Baker in the A24 series De La Resistance, but a release date has not been revealed yet.

Glass Onion will premiere in select theaters before arriving on Netflix December 23.