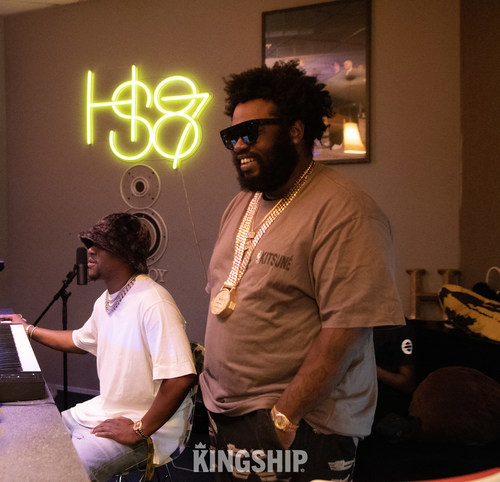 KINGSHIP, the NFT supergroup signed to 10:22PM, announced today that two chart-topping and award-winning music producers and songwriters Hit-Boy and James Fauntleroy have signed on as the group’s co-executive producers and sonic creative team, overseeing the evolution of the group’s music direction and sound. Together, they will work with Arnell, the group’s Mutant DJ and Producer.

10:22PM and KINGSHIP, whose members include Captain (vocals, bass), KING (lead vocals), Arnell (beats, producer, drums) and Hud (guitar, keyboards, vocals), shared a first-ever glimpse of the group’s musical direction in a 30-second animation titled “Rider,” which acts as the second chapter in the group’s story. This animation also reveals the group’s recent partnership with M&M’S®.

“I’m always looking to push things forward musically,” said Hit-Boy, “and this is a great opportunity to do something new in the web3 space.”

Fauntleroy added, “It’s so exciting to be a part of something historical and ambitious. As a huge nerd, and music fanatic, I can’t wait to see what comes from the intersection of the web3 collectors/creatives and the entertainment creative community.”

“KINGSHIP’s journey is rooted in storytelling, experiences and music,” said Celine Joshua. “I’m incredibly thankful that Hit-Boy and James Fauntleroy, two of the most influential and creative geniuses in the entire industry, are coming together to develop the music and sound for KINGSHIP.”

As one of the music industry’s most sought out producers and artists, the California-bred Hit-Boy has more than earned his moniker. Born Chauncey Hollis, the 3x Grammy Award-winning multi-hyphenate artist from Pasadena and the neighboring Inland Empire boasts an impressive roster of credits, from wielding pop smashes for Beyoncé, Rihanna and Ariana Grande, to producing hit records for Jay-Z, Kanye West, Kendrick Lamar, Travis Scott, and more over his thirteen plus years in the industry. As a rapper and songwriter in his own right, Hit-Boy has recorded and released seven mixtapes and three collaborative albums. Recently earning a Grammy for Nas’ King’s Disease (He served as an executive producer on the ‘Best Rap Album’), the super producer earned his first-time Grammy nomination for ‘Producer of the Year’ category in 2021. He has racked up several additional accolades, including ‘Producer of the Year’ at the 2021 and 2020 BET Hip-Hop Awards, ‘Producer of the Year’ at the XXL Awards, ‘Outstanding Producer of the Year’ at the 2021 NAACP Image Awards and Complex’s ‘Best Hip-Hop Producer Alive’ of 2020. He also served as executive producer on Big Sean’s Detroit 2 (debuted No. 1 on the Billboard 200), is currently working on his own artist project, Surf Or Drown (Q4 2022), and recently produced ‘THIQUE’ on Beyoncé’s latest Billboard 200 #1 project, Renaissance.

Additionally, Fauntleroy has a background in 3D modeling, web design and coding and frequently experiments and collaborates with the world’s leading visual artists. Alongside producer Larrance Dopson and entrepreneur Twila True, Fauntleroy founded the 1500 Sound Academy in Inglewood, California, where students from the area and across the globe come to learn about engineering, producing, branding, publishing business and songwriting from expert guest speakers and a curriculum that spans practical information along with the musical and technical lessons.

Last month, KINGSHIP sold out their entire collection of 5,000 access-enabled Key Cards in the form of non-fungible tokens (NFTs) and ranks No. 1 on OpenSea’s Music NFT chart.

The collectible Key Cards feature different KINGSHIP members and contain unique attributes, some more rare than others. In addition to membership to the group’s virtual world, located on an island far away from the swamp where Captain, KING, Arnell and Hud were born, the Key Cards will also unlock exclusive access to music, content, products, and a token-gated community, as well as a special token-gated Discord channel.