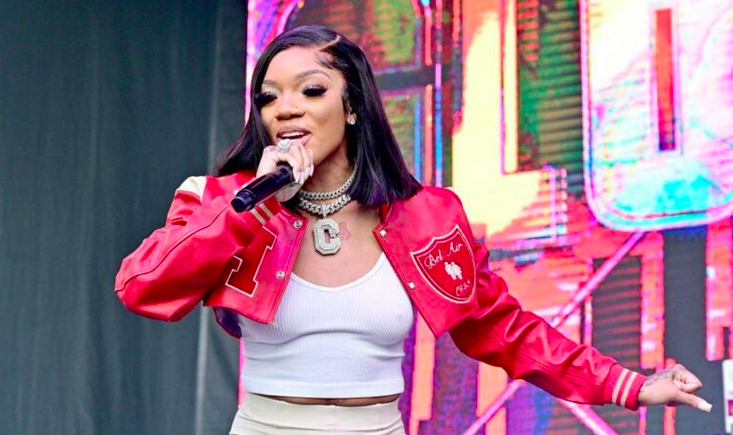 Memphis star GloRilla has announced her label debut EP Anyways, Life’s Great…, which is set to drop on November 11.

This week, GloRilla gained her first Billboard Top 10 record with single, “Tomorrow 2” featuring Cardi B. The track debuted at No.1 on Apple Music, trended No.1 on YouTube and landed at No.9 on the Billboard Hot 100 chart.

GloRilla took the stage for her television debut performance at the 2022 BET Hip Hop Awards. Sporting a red and silver sequin Big Glo baseball jersey, the Memphis rapper entered the stage from the crowd with equally glistening backup dancers twerking as her single “Tomorrow” began to play.

Proving her star potential, the 23-year-old artist had the engaged crowd on their feet as she performed her single “Tomorrow,” before moving to center stage with her breakout hit, “FNF.”

“Let’s go BET!” she shouted, as she confidently clinched the mic. “The Memphis way,” she proclaimed as the crowd turned up to the party-ready track. A proud Yo Gotti looked on, singing along. KaMillion and Lil Kim also rapped along to the 2022 anthem from the audience.

The accompanying video is a high-energy party with GloRilla and her girls rolling through New York City, dancing on bodega counters and subway turnstiles. Cardi eventually comes through to join in on the fun, making for an explosive collaborative effort that was a long time in making, especially after the Bronx native co-signed GloRilla earlier this year.

Prior to her performance, GloRilla snagged the Best Breakthrough Hip Hop Artist award, and considering her accomplishments this year, the title was well deserved. After the aforementioned “FNF” went viral, she signed a deal with Yo Gotti’s CMG and released the “FNF” remix featuring JT and Latto among other songs.

On Monday (Oct. 3), GloRilla officially nabbed her first top 10 hit on the Billboard Hot 100 with “Tomorrow 2” featuring Cardi B, taking the no. 9 spot.

“I don’t wanna cry my makeup off,” shared the hitmaker as she accepted her trophy. “Let’s goooooo!”