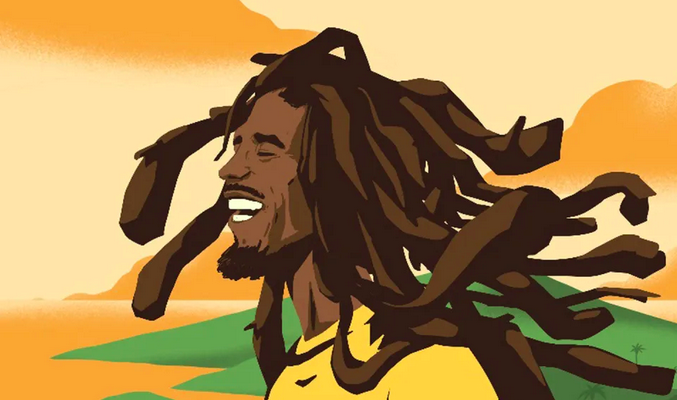 Today, in honor of The Summer of Marley, a brand new, official music video for Bob Marley & The Wailer’s “Could You Be Loved” debuts on Bob Marley’s Official YouTube Channel. The animated video was inspired by Cedella Marley, who has been tapped as the global ambassador of the Jamaican women’s Football program. In addition, Cedella also recently launched a women’s football initiative called ‘Football is Freedom,’ aimed at providing tools & resources to grow & promote the sport for women in the Caribbean/Latin America. The “Could You Be Loved” video follows a little girl from Jamaica pursuing her dreams of playing soccer in a world where it’s not very common. Throughout the storyline, the protagonist finds strength and courage in her surroundings and overcomes her inner doubts with Bob Marley as her guiding light, encouraging her to stay positive & keep going. The video shines a light on the girl’s journey as she ultimately grows into a confident young woman & becomes the star player on her team, winning the championship in the end. Watch the video for “Could You Be Loved” on Bob Marley’s Official YouTube Channel HERE.

Last month, the Marley Family, Island Records, and UMe marked the 45th anniversary of Exodus – with a digital Exodus: Deluxe Edition. The digital deluxe album features the ten tracks from the original album, plus 18 Singles & Sessions tracks; 13 of the tracks were culled from two previous Deluxe Editions. Previously unreleased tracks, “Natural Mystic (Horns Mix),” and “The Heathen (Alternate Version),” and the rare 7-inch versions of “Exodus,” “Jamming,” and “Punky Reggae Party,’ the original B-side to “Jamming” are also included on the new digital deluxe, as well as two cuts previously unavailable at all streaming services, plus two additional bonus tracks: the edited live versions of “So Much Things To Say” from the June 1st show, previously released on the Deluxe Edition of Exodus 40 – The Movement Continues in 2017, and “Exodus,” the finale from the Rainbow’s June 2nd set, previously featured on the album’s 2001 Deluxe Edition. Each performance is otherwise presented unedited within their respective live set. Click HERE to listen to Bob Marley & the Wailers’ Exodus: Deluxe Edition.

In other news, Bob Marley & The Chineke! Orchestra will be released by Island Records/UMe on July 22. The album reimagines some of Bob Marley’s greatest songs with contemporary classical orchestration from the globally esteemed Chineke! Orchestra. Recorded at Abbey Road Studios and produced by Nick Patrick (If I Can Dream, Elvis Presley and the Royal Philharmonic Orchestra, True Love Ways, Buddy Holly and The Royal Philharmonic Orchestra), reimagined tracks include “Satisfy My Soul,” “Exodus,” “Is This Love,” “Redemption Song,” “Get Up, Stand Up,” plus “One Love/People Get Ready,” which was released as a lead track on March 25. Listen to Bob Marley & The Chineke! Orchestra here

Continuing the Summer Of Marley festivities, Ziggy Marley is currently on the European leg of his summer tour, performing a live tribute to his father as part of the belated Bob Marley 75th Birthday celebrations. Ziggy and his band will breathe new life into Bob Marley’s most iconic songs on all of his headlining summer tour dates in Europe, the U.K., and North America. The tour kicked off in the U.K. last month and continues through July before heading back to the U.S. in August, where he will join Jack Johnson as a special guest on select dates. For more information on Ziggy Marley’s tour dates, please click HERE.