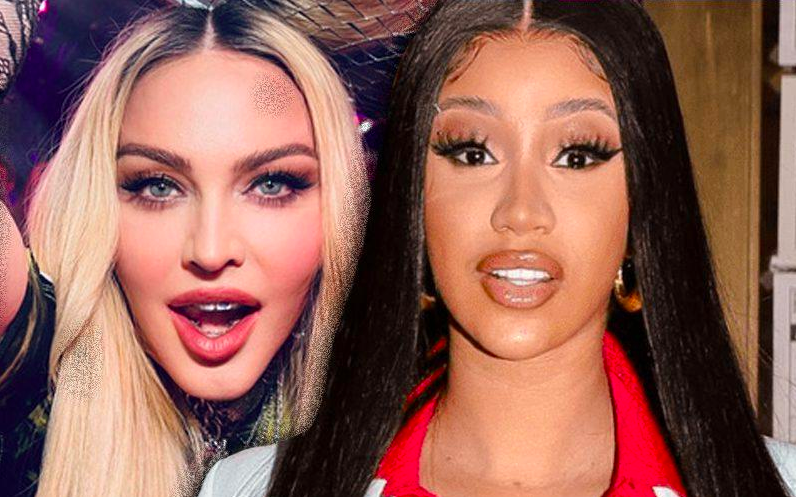 Madonna’s recent comment about paving the way for other women in music isn’t sitting right with one artist.

Cardi B took to Twitter to respond to Madonna, after the 64-year-old singer named Cardi in her Instagram Story while discussing her coffee table book, S.E.X. The once-controversial book was released 30 years ago this week.

“30 years ago I published a book called S.E.X. In addition to photos of me naked there were photos of Men kissing Men, Woman kissing Woman, and Me kissing everyone. I also wrote about my sexual fantasies and shared my point of view about sexuality in an ironic way,” she wrote on Saturday.

The “Material Girl” concluded her story with, “You’re welcome bitches” and a clown face emoji.

Cardi B, who met Madonna at an Oscars after-party in 2018 and gushed about meeting her “real life IDOL” on Instagram at the time, took Madonna’s post as an egregious insult

“I literally payed this woman homage so many times cause I grew up listening to her … she can make her point without putting clown emojis and getting slick out the mouth,” Cardi B tweeted Sunday in a since-deleted tweet, per Billboard. “These icons really become disappointments once u make it in the industry that’s why I keep to myself.”

“Now Cardi B can sing about her WAP. Kim Kardashian can grace the cover of any magazine with her naked ass and Miley Cyrus can come in like a wrecking ball,” Madonna added. “You’re welcome bitches,” she concluded, alongside a clown emoji.

That clown emoji and use of the word ‘bitch’ is what Cardi took offense to. She addressed Madonna’s comment on Twitter, writing, “I literally [paid] this woman homage so many times cause I grew up listening to her …she can make her point without putting clown emojis and getting slick out the mouth ..These icons really become disappointments once u make it in the industry that’s why I keep to myself.” Cardi also posted a screenshot of her sharing just how impactful Madonna’s music was for her.

Cardi B said in 2018 that she rapped at an event of Madonna’s and called it “the most meaningful performance ever.” She added that she grew up listening to Madonna, performed “Material Girl” in high school and played her music at photo shoots “to have super confidence.”

Some Twitter users responded to Cardi B’s string of since-deleted tweets and said Madonna was merely stating she “paved the way for sexual songs to become mainstream.” Their attempts to convince Cardi B that Madonna wasn’t trying to insult her, however, didn’t stick.

“I know exactly what she said and I understand,” Cardi B replied, “but it’s about THE TONE … Calling me bitches and putting clown emojis? The fuck!”