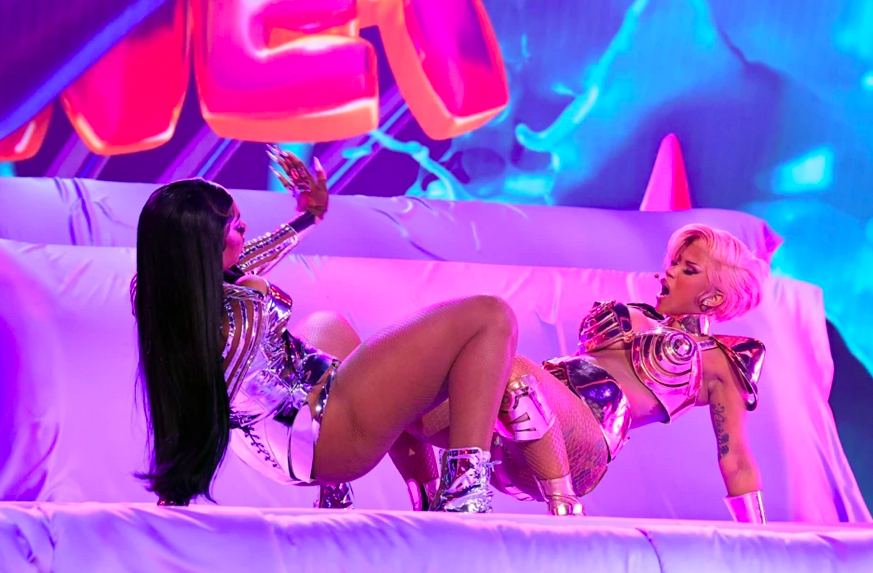 Cardi B and Megan Thee Stallion joined forces at the Wireless Festival in London on Friday (July 8).

The hip-hop superstars, who were both part of the U.K. festival’s weekend lineup, surprised fans with an explosive performance of their hit song “WAP” during Cardi’s headlining set at Finsbury Park.

The pair last teamed up onstage for “WAP” during a truly wild delivery of the Billboard Hot 100 hit at the Grammy Awards in 2021. During the spicy performance, the rappers spit their verses while crawling and gyrating around on a gigantic bed in the middle of the stage.

But “WAP” wasn’t the only talked-about moment during Cardi’s Wireless appearance. The hip-hop star took to social media Friday night to clarify that she didn’t get into an altercation with festival-goers during the show. “It wasn’t NO FIGHT,” she tweeted, pointing her followers to a video of the moment, which shows the artist in the pit surrounded by screaming fans.

Cardi recently unveiled her first song of 2022, “Hot Shit,” featuring Kanye West and Lil Durk. She tweeted on Saturday that the music video for the track could arrive any day now. “Hot Shit” will appear on her as-yet untitled sophomore album, which is the follow-up to her Grammy-winning debut, Invasion of Privacy.