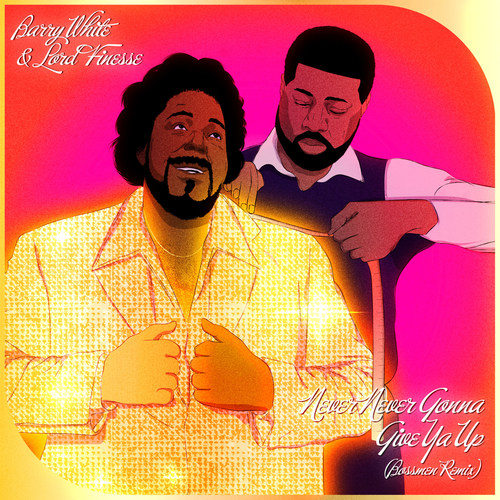 “Never, Never Gonna Give Ya Up” remix artwork by Darryl Sharp

Barry White‘s iconic worldwide smash “Never, Never Gonna Give Ya Up” has received a special remix treatment by legendary rapper, hip-hop producer, and founding member of the influential collective Diggin’ In The Crates Crew (D.I.T.C.), Lord Finesse: “Never, Never Gonna Give Ya Up (Bossmen Remix).” In addition, there’s a seven-minute-long extended version of the track as well as an instrumental version which accompanies the remix just in time for Valentine’s Day, a quintessential holiday for “The Godfather of Bedroom Soul” (Rolling Stone). All are out today via UMe.

Known for his work with countless hip hop and R&B icons, Lord Finesse has been hugely influenced by the “Immortal Maestro” Barry White and was honored by the opportunity to reimagine this defining multi-generation track. “‘Never, Never Gonna Give Ya Up’ is one of my favorites in his catalog,” he says. “The composition has such a vibe: dark, soulful, theatrical, but sexy.” In the same sense as custom tailoring a suit, Lord Finesse doesn’t use a one size fits all approach to his music. Instead, he wanted every part of this remix to be tailor-made for Grammy Award-winning singer Barry White’s vibe. He adds, “I kept the drums, brought out the vocals, tailored a sexy and soulful arrangement to complement the direction of the original song.” The love ballad provides an expansive journey from R&B with hints of psychedelic funk to piano soundscapes and beyond, embracing the real low-down slow-jam swing and emphasizing White’s smooth-talking, romantic DNA. Reflecting Lord Finesse’s “custom fit” approach, the artwork for this remix was illustrated by Darryl Sharp, a Virginia-raised, Los Angeles based designer who has done work for other superstar artists.

For Lord Finesse, White was just as influential as James Brown and Kool & the Gang were for the ’90s hip-hop generation, making this release a perfect, custom fit. This remix follows his June 2020 Motown State of Mind release, a set of handpicked Motown classics such as Marvin Gaye’s “I Want You” and DeBarge’s “I Like It,” remixed and reimagined.

Originally released in June 1973, “Never, Never Gonna Give Ya Up” was the first U.S. single from Barry White’s second album, Stone Gon‘. The song was written, produced and recorded by White and hit gold status after reaching #2 on the Hot R&B/Hip-Hop Songs and #7 on the Billboard Hot 100 charts. The song was released in Europe in early 1974 where it peaked at number 14 on the UK Singles Chart. The track also became a UK Top 40 hit in 1997 after Lisa Stansfield, who teamed up with White for a duet version on her 1989 song “All Around the World,” covered “Never, Never Gonna Give Ya Up” for her eponymous album. Stansfield’s version was a No. 1 smash on Billboard Magazine’s Top Dance Tracks chart.

As one of the biggest soul stars of the 1970s, Barry White (born Barry Eugene Carter; September 12, 1944 – July 4, 2003) made an effective comeback in the ’90s with several album releases: 1991’s Put Me in Your Mix (which reached #8 on the Billboard R&B albums chart and the title track reached #2 on the Billboard R&B singles chart) and 1994’s The Icon Is Love (went #1 on the Billboard  R&B album charts, with the single “Practice What You Preach” giving him his first #1 on the Billboard  R&B singles chart in almost 20 years). The Icon Is Love was also nominated for a Grammy in the Best R&B album category but lost to TLC’s CrazySexyCool. Proving how timeless his music is, White’s 1977 hit “It’s Ecstasy When You Lay Down Next To Me,” was sampled by Robbie Williams‘ on his 2000 song “Rock DJ.” In 1996, White recorded a duet with Tina Turner (“In Your Wildest Dreams”) and a duet with Chris Rock (a remake of Cheech & Chong’s “Basketball Jones” from 1973) for the Space Jam soundtrack. White released his final album Staying Power in 1999 and its title track was #45 on the Billboard R&B charts and won him two Grammy Awards in the categories Best Male R&B Vocal Performance and Best Traditional R&B Vocal Performance.

He finally returned as an artist in 1996 with the now rare 12″ single “Check The Method” and then the acclaimed album The Awakening. Which featured the Single “Hip 2 Da Game” Finesse produced the entire album, and enlisted a large number of guests.

In 1997, he produced the track “The Message” on Dr. Dre‘s album 2001 and in 1999 he provided the vocal sample on the hook to the International Smash “The Rockafeller Skank,” by British musician Fatboy Slim from his album “You’ve Come a Long Way, Baby.”

Finesse is currently working on more projects due in 2022.