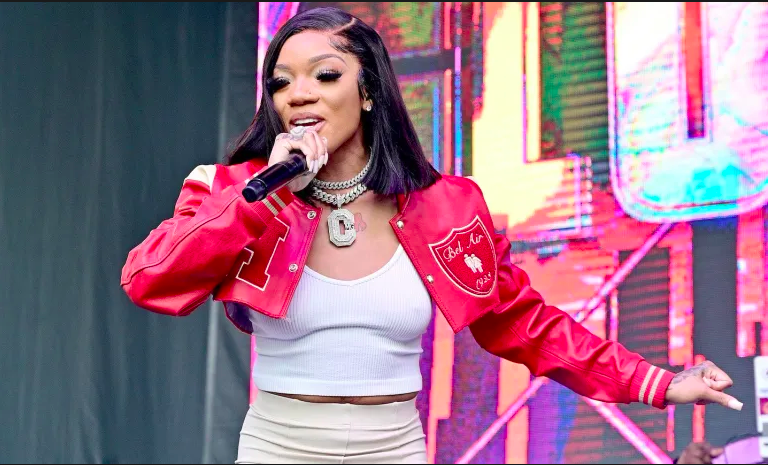 “All my opps scary, they won’t pop up at the party/Got them bitches runnin’ from me, like an episode of Maury,” Latto spits.

The “F.N.F.” remix is another major milestone for GloRilla, who has become a nationwide star thanks to the smash hit with HitKidd. She now recruits two of the most powerful women in rap–JT and Latto–to elevate the breakout song to new heights and put their collective stamp on the ode to enjoying single life.

“GloRilla is a natural born star—she has a different sound and approach that’s needed in hip-hop right now,” Yo Gotti said at the time of the signing. “It’s one of the quickest rises that I’ve seen in my career because she only dropped in late-April and now she has the hottest cultural records in music. Glo is hungry for success and determined to win. We look forward to watching her grow as an artist and reach her full potential.”

The anthem ultimately led to the Memphis native signing with Yo Gotti’s esteemed CMG record label in partnership with Interscope. Since then, GloRilla has maintained her momentum with singles “Blessed” and “Tomorrow,” one of the standout cuts from CMG’s star-studded compilation album, Gangsta Art, and a feature on Duke Deuce’s “Just Say That.”

GloRilla added, “I’ve put in years of hard work to get this point and I’m blessed to sign with the hottest label in music with CMG. I manifested this moment and trusted my talent even when others didn’t. I’m grateful for Gotti for believing in me and I’m not gonna let up. Trust that I have more new heat on the way.”GloRilla’s has garnered widespread support across the hip-hop community, receiving co-signs from the likes of Travis Scott, Cardi B, Saweetie, Latto, and many more. In addition to being named Billboard’s July 2022 Chartbreaker, in which GloRilla detailed the backstory behind the creation of “F.N.F. (Let’s Go),” she’s also featured in NY Mag’s 2022 Fall Preview. With her new star-studded remix, GloRilla is poised to continue her ascension as one of music’s most exciting new voices.