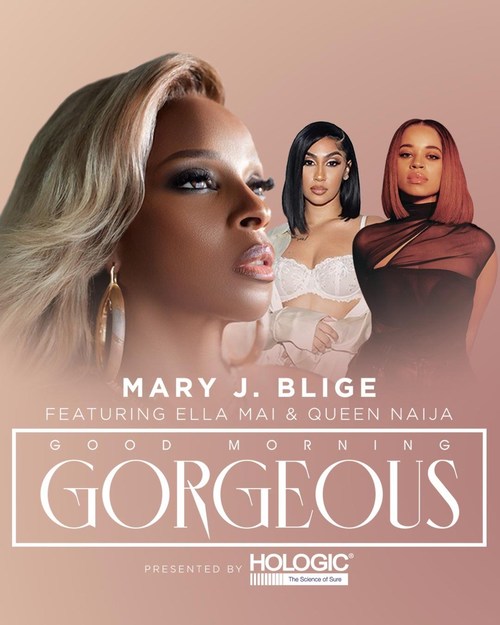 TICKETS ON SALE STARTING JUNE 17 @ 10 AM LOCAL AT BLACKPROMOTERSCOLLECTIVE.COM

One of Time magazine’s icons listed in “The 100 Most Influential People of 2022” and the recipient of the 2022 “Billboard ICON Award,” the undisputed Queen of Hip Hop Soul, Mary J. Blige, announces her Good Morning Gorgeous tour presented by Hologic in partnership with The Black Promoters Collective (BPC). GRAMMY Award-winning and Oscar-nominated Blige will perform in 23 cities with special guests, platinum-selling, GRAMMY Award-winning artist Ella Mai and platinum-selling rising star Queen Naija beginning on Saturday, September 17, in Greensboro, NC, and ending on Saturday, October 29 in Atlantic City, NJ. The tour also stops in Los Angeles, New York, and Atlanta.

Before offering to the general public, the Good Morning Gorgeous tour tickets go on presale today with The American Express® Card Members beginning June 15 at 10 am local time through June 16 at 10 pm local time. Tickets will be available to the general public on June 17 at 10 am local and range from $69.50 to $189.50. Tickets can be purchased here.

“Mary J. Blige has been one of a select handful of artists at the top of our desired list to partner with since the initial construction of The BPC. Having her support in our mission so early in the process is a testament to the hard work we have put in to bring superior cultural experiences powered by black business to the masses. We firmly believe this is a match made in heaven and are honored to partner with the Queen,” states The BPC Co-Founder and President Shelby Joyner.

“We’re thrilled to continue our partnership with Mary J. Blige as the presenting sponsor for her Good Morning Gorgeous tour,” said Steve MacMillan, Hologic’s Chairman, President, and Chief Executive Officer. “As a global leader in women’s health, we’re committed to emphasizing the lifesaving importance of preventive screenings and the annual Well Woman exam, and Mary’s voice is a powerful way to reach millions of women.”

In addition to the previously stated accolades, the tour follows Blige’s early 2022 album release of Good Morning Gorgeous. The album was released leading into her energetic Super Bowl Halftime performance. The title track rose to #1 at R&B radio for 9 weeks and the song became a viral backdrop for many expressing self-love, with over 40,000 users creating videos using the song on TikTok. A deluxe version was dropped just ahead of her wildly successful “Strength of a Woman” festival that took place last month in Atlanta.